What is a Jewish boy from Eastern Europe Doing with a German Name? — Finding History and Heritage (Part 2)

What is a Jewish boy from Eastern Europe Doing with a German Name?

For most of my life I assumed that my name came from the German word for “treasure” – often used as a word of endearment for your wife or sweetheart.  A couple of weeks ago when checking in for my plane in Flagstaff, AZ, the counter person said, “Greetings Mr. Treasure.”

After 50+ years, I finally learned from a Hebrew scholar friend of my older son that the name has nothing to do with the German word, but is the contraction of two Hebrew words.  Traditionally, Jews did not have last names.  I would have been known as “Dennis, son of Myron” – my father’s first name.  But the Czars forced all Jews in Russian controlled Eastern Europe  to have a last name, which often related to their profession or position in the community.  Thus Schatz is the contraction of the Hebrew “Shaliakh Tsibur” — don’t ask me how to pronounce it – which means “lay leader of the congregation.”  Schatz comes from combining the first sound of each word (“sch” and “tz”).  One can’t pronounce this without a vowel, so an “a” was added to connect them.

The name “Katz” comes from the same process.  “Kohen Tsadik” is Hebrew for rabbi, thus K + A +TZ forms Katz.

It was with this limited knowledge of my family lineage that Leila and I returned to Lithuania to track down my family heritage where I assume at least one of my ancestors was the Lay Leader of the Congregation.

Walking in My Grandfather’s Steps

Attending the science center conference in Warsaw (the topic of one of my recent blogs) was the perfect excuse to visit my grandfather’s hometown in Lithuania, which shares a border with Poland. Leila and I ventured to Pilvishok (pill-va-SHOCK) – spelled “Pilviskiai” in Lithuanian where my grandfather – on my father’s side – was born. 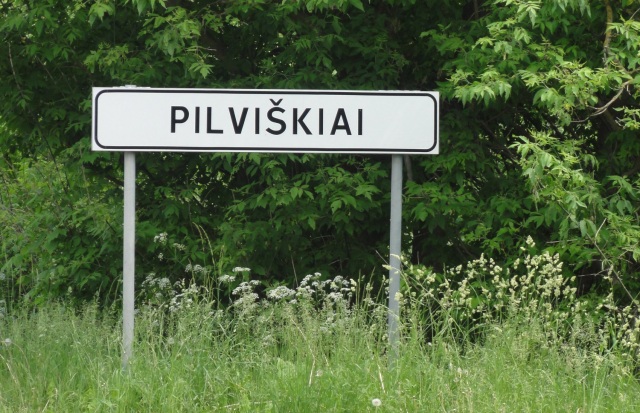 The town’s name comes from the Pilve River which flows by the town.

Pilvishok is about 100 miles west of Vilnius, the country’s capitol.  Vilnius looks like most modern European cities with many stylish young people connected to their electronic devices.  Vilnius recently made the news when the mayor decided to take extreme measures against people who parked illegally – he drove a tank over the top of the cars.

Photo Compliments of the Local Press

You can see the mayor in action at: http://www.youtube.com/watch?v=FQ-8xj8CUZw

We do know that my grandfather, Harry Schatz, immigrated to Des Moines, Iowa, in 1896 at the age of 16. Many people were forced to leave Pilvishok after a fire in the late 1800’s destroyed most the town of about 2,000 people.  More than half of these people were Jews.

Why Des Moines, Iowa, you might ask?  It was because his sister, who emigrated a number of years earlier, lived there.  But that only shifts the question to why did she move there?  Although we don’t know for sure, one reason came to me as I perspired profusely during our travels to Pilvishok.  Iowa and Lithuania are both hot and humid in the summer and cold and snowy in the winter – and much of the countryside reminded me of Iowa.

We were lucky enough to find a guide whose profession is to help family’s connect to their heritage in Lithuania.  Regina Kopilevich has helped more than 150 families search out reminders and remnants of their heritage.

She hired a driver to take the four of us to Pilvishok, which turned out to be primarily a reflective, somber and sobering experience.  The place is still a small, rural town.  We ate at the only restaurant in town, which was connected to a small inn. 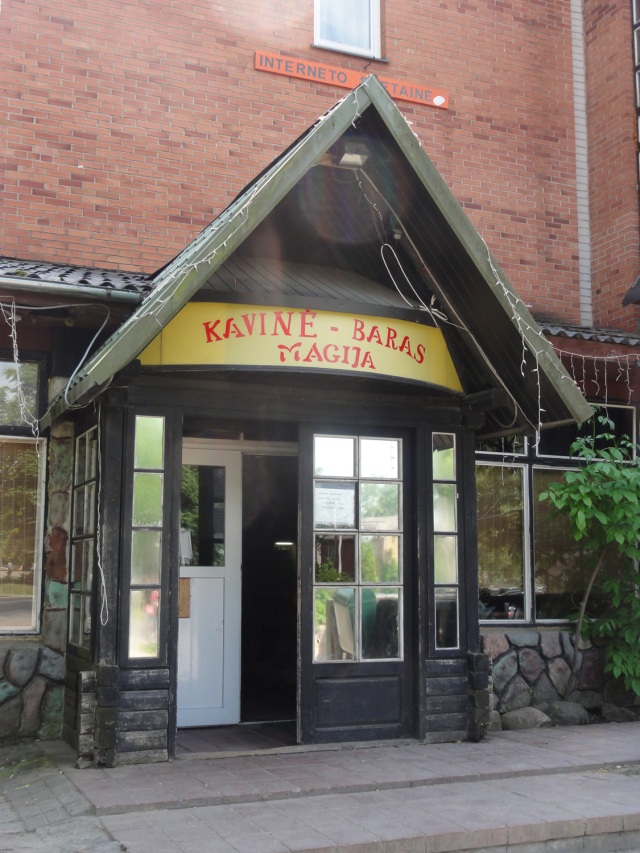 The food was simple and tasty – and the price was right.  We each had borscht and shared two main dishes.  Total cost was $12 Litai (about $4.00).  Although Lithuania is now part of the European Union (EU), it has not yet adopted the Euro – and probably won’t given the recent financial uncertainty in the EU.

The only post box was a small yellow container outside the post office.  I took the opportunity to mail a few postcards to relatives to say they were mailed from Grandpa’s home town.

There is essentially nothing remaining to remind one that the town was once more than half Jewish.  A collection of seven gravestones are nestled below a tree next to a large playfield near the inn where we had lunch.  No gravestones had the Hebrew for Schatz.

These few gravestones were moved here when the Soviets eliminated the original cemetery for a waterworks improvement project.  No other remnant of the Jews in Pilvishok remain, although we were offered the opportunity to visit the “killing fields” and “mass graves”  three miles North of the town where more than 1,000 Jews were murdered and buried during WWII.  We passed on the opportunity after a day of seeing what little remained of Jewish life in Pilvishok.

We did visit the Pilvishok train station, which still has regular train service. 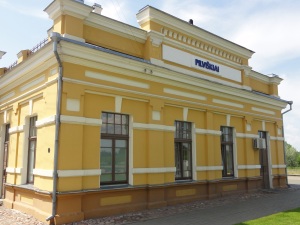 It was the embarkment location for many Jews who were sent East to Soviet Gulags when the Soviets controlled the area before WWII. 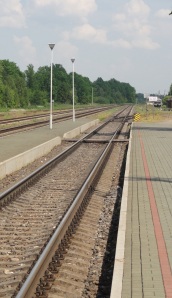 After the Germans invaded, it became the embarkment point to the West for the extermination camps.  Ironically, those people sent to the Gulags were more likely to survive WWII than those people who remained to be dealt with by the Germans.

The fate of the Jews in Pilvishok was not much different from the rest of Lithuania.  Before WWII there were 250,000 Jews in the country.  Today there are 5,000.  Vilnius, the largest city in the country has only one operating synagogue. 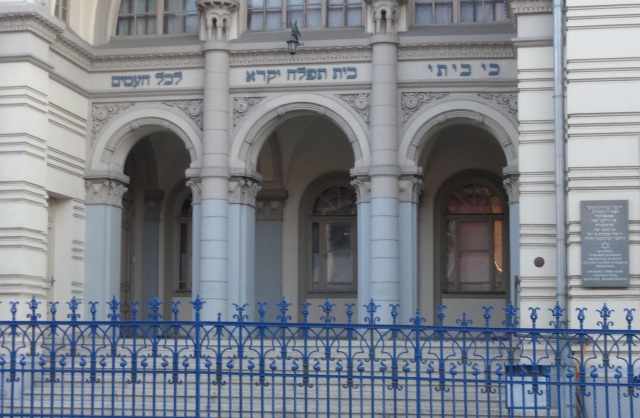 Regina did take us by buildings that used to be synagogues. 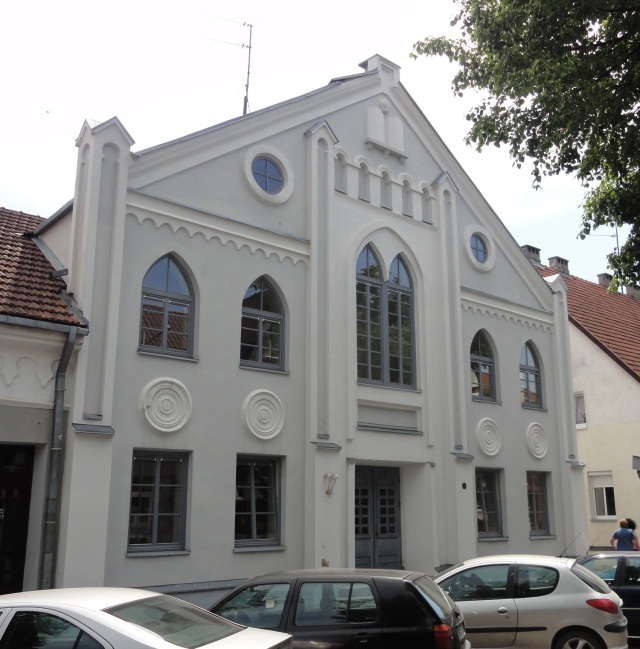 Both of these buildings are in Mariampol, about half way between Vilnius and Pilvishok.  The first one is now a teacher’s college and the other houses a weaving factory with rows of large, loud weaving machines.

We went through Mariampol because we did find out from a distant relative in Israel that my grandfather’s father moved to Mariampol to live with his daughter after his wife died.  We thought maybe we could find his grave.  But like Pilvishok, little remains of the Jewish cemetery – just 10 headstones in a circle with a memorial in the center to note that a large Jewish cemetery once existed here.

Again, no gravestones with the Hebrew name Schatz.

Not All Somber and Reflective

The 100 mile drive back to Vilnius was primarily a quiet and reflective time, but we did get to enjoy some of the country’s beauty.  Lithuania is the land of storks, with the White Stork being the national bird (three to four feet tall, with a wing span of six to seven feet).  You see them walking across the fields looking for food or nesting in any high location that provides a big enough base for their large nests. 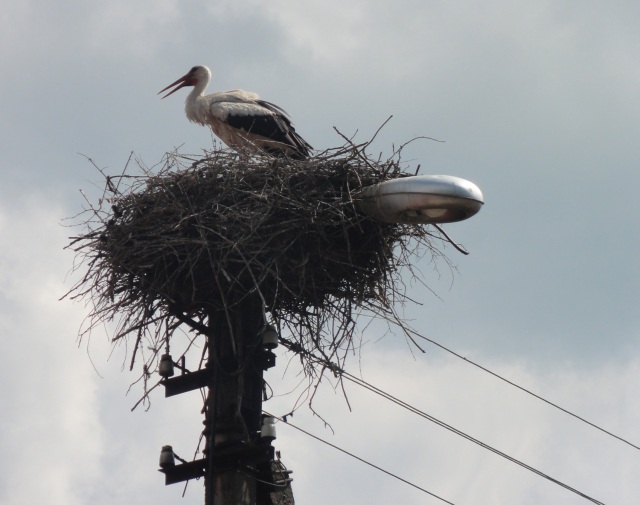 A number of webcams are set up to follow storks in their nest.  Unfortunately, the birds have migrated to Africa for the winter.  You can bookmark one of the webcams (http://www.ustream.tv/channel/stork-nest-lithuania) and wait for next spring or you can go to YouTube to see several videos.  Here’s a cute one of an adult stork feeding five babies http://www.youtube.com/watch?NR=1&v=M6kvxoc59PA).

On the way back to Vilnius, we passed through Kaunas, the second largest city in Lithuania, where we enjoyed beautiful views of the river and the “time travel” bridge.  In the early 1900’s, one side of the river followed the Gregorian calendar, while the other side followed the Eastern Orthodox calendar, so crossing the bridge took you 13 days into the past or future, depending on which way you traveled.

We also got a great view of what I dubbed the “Smiley Face Sundial.”  The whimsical sundial decorates the side of a Kaunas University of Technology building. 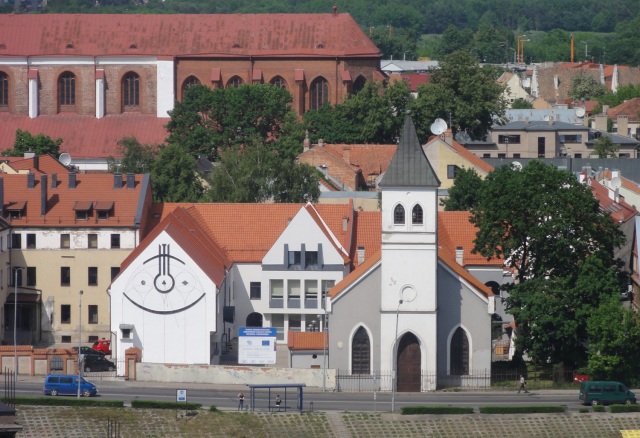 What’s brown and green, and been in training for 400 years.  Check the next blog post for the answer.

This entry was posted in Uncategorized. Bookmark the permalink.

8 Responses to What is a Jewish boy from Eastern Europe Doing with a German Name? — Finding History and Heritage (Part 2)