From Sand Sculptures to Evidence for Tasmanian Devils

Continuing my pandemic resolution to do more B&W photography, I went back to some of our travels to find events that lend themselves to enjoy in B&W.  One of our favorite trips was to the Freycinet Peninsula, 120 miles north of Hobart in Tasmania.  If you love the Northwest like Leila and I do, you feel right at home with the dramatic headlands and cool temperatures, but with more sand beaches.  The regular winds made for beautiful beach sculptures, and we even saw signs of the elusive Tasmanian Devil.

Clouds above the Freycinet Peninsula

Beach Sculpture 3 — I know it is not all B&W, but this looked so much better with just a little color 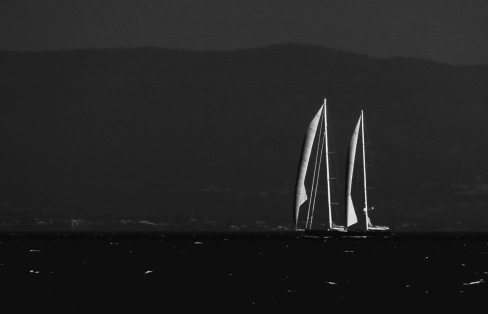 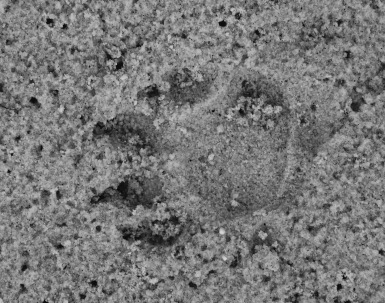 From Blue Herons to Driftwood Sculptures

When I got my first camera a little over 50 years ago, I enjoyed working in B&W, when one actually had to thread B&W film into your camera.  One of my COVID pandemic resolutions is to starting doing more B&W photography.

In August, Leila and I escaped our home isolation for the first time since early March to enjoy four wonderful days staying at a friend’s cabin on the Olympic Peninsula.  These B&W photos, from Marrowstone Island (near Port Townsend) and Dungeness Spit, are the results of my attempt to focus on recovering my past interest. 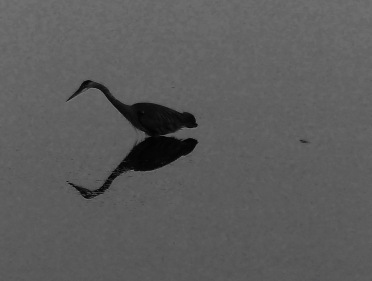 Blue heron on the hunt for food 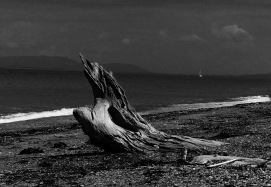 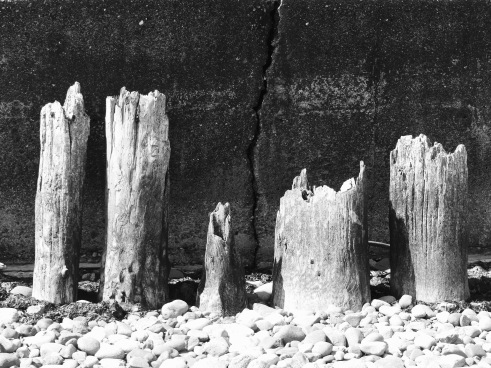 Years of wear at East Beach park on Marrowstone Island

Tourists in Morocco tend to stay in the old parts of the cities.  These medinas contain a labyrinth of narrow passages that include the souks (shopping areas) and riads (usually houses of past upper class citizens recently converted to hotels – think high end bed and breakfasts). 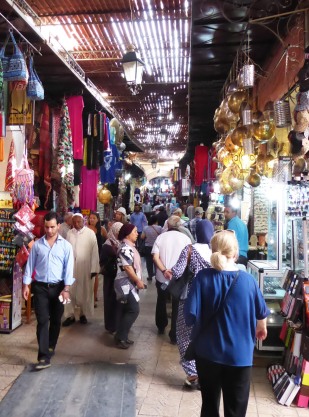 It’s easy to get lost in the souks, so we opted for guides in both Fez and Marrakesh to help us navigate the maze of passages. They also advised us on the methods to negotiate the best prices for items, as haggling over prices is a must.  Embroidery, metal work and ceramics were high on our list of items to purchase.

Walking the souks was often like being in a vast farmer’s market, with each shop having its specialty. 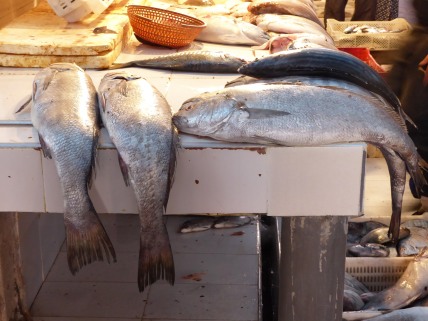 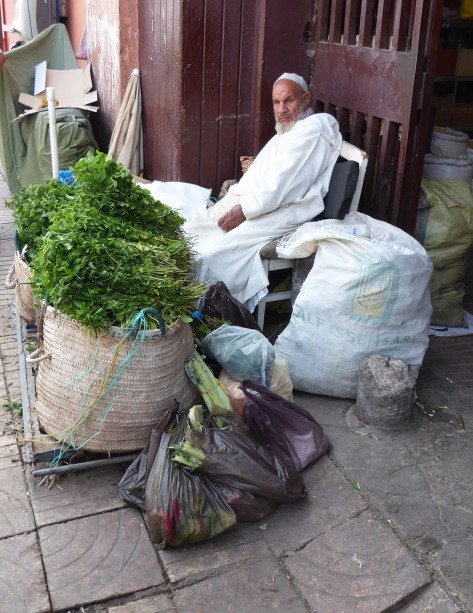 I was most taken by the colors and geometries. 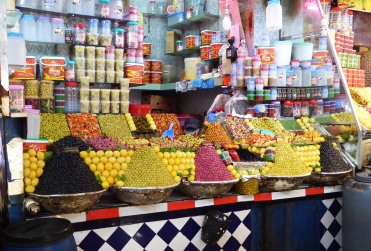 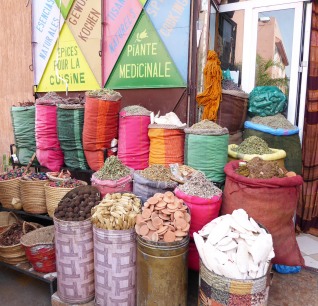 The narrow streets presented challenges not seen outside the medina.

While there was a vast array of transport (cars, motorcycles, bicycles, horses, donkeys and donkey carts), one piece of modern technology was often seen being used by the riders.  Everyone seemed to have a mobile phone, which of course required many cell towers.  A number of these were disguised as palm trees. 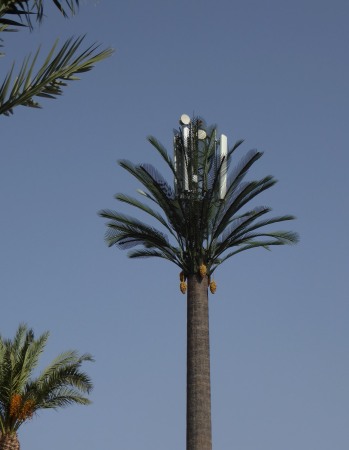 Another pervasive modern technology was television reception dishes, seen on top of even the oldest structures.  Residents pay a onetime $50 fee and then have ongoing access to television, thus television dishes were everywhere.

When you overdosed on the crush of people, bartering and noise, you step into your riad and leave it all behind.  The quiet central courtyard and atrium usually has a water feature and a display of flowers that contrast with what is just outside your door.  After a rest in your room, a quiet dinner awaits you. 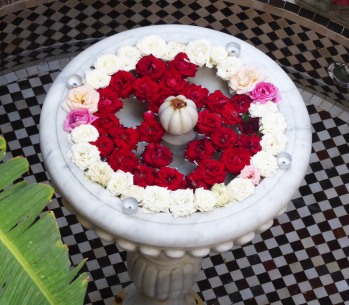 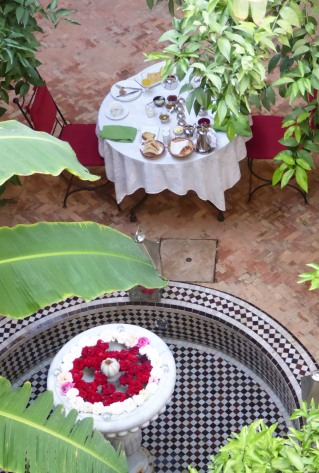 The medinas house many traditional communal functions.  Women prepare bread daily for the family, which require taking the leavened, but unbaked, bread to communal ovens. 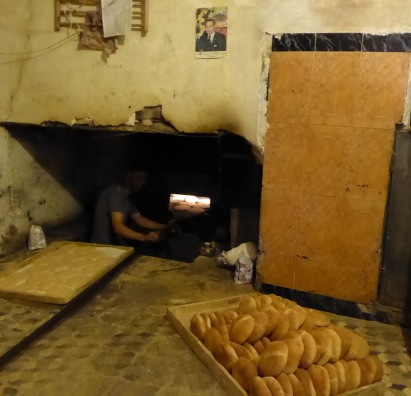 Tourists can easily come away thinking that this traditional view of life in Morocco is the norm. But many people move away from the medinas to enjoy the advantages of the “New Town.”  Townhouses with modern conveniences, such as individual ovens in each house, and modern shopping areas that look like your local grocery store and Home Depot. 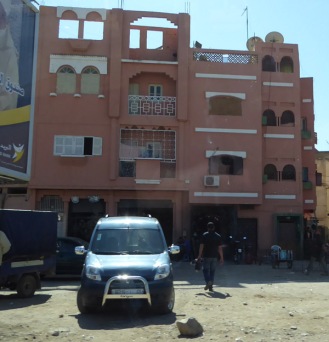 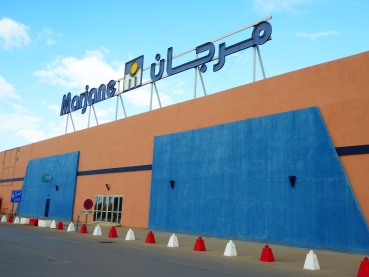 Our guide in Marrakesh, Hajja, not only navigated the souks for us, but showed us the architectural sights – mosques and palaces that made us feel like we were back in southern Spain.  This made sense, since many of the Moors who were driven out of Spain in the fifteenth century moved to Morocco and continued to build similar structures. 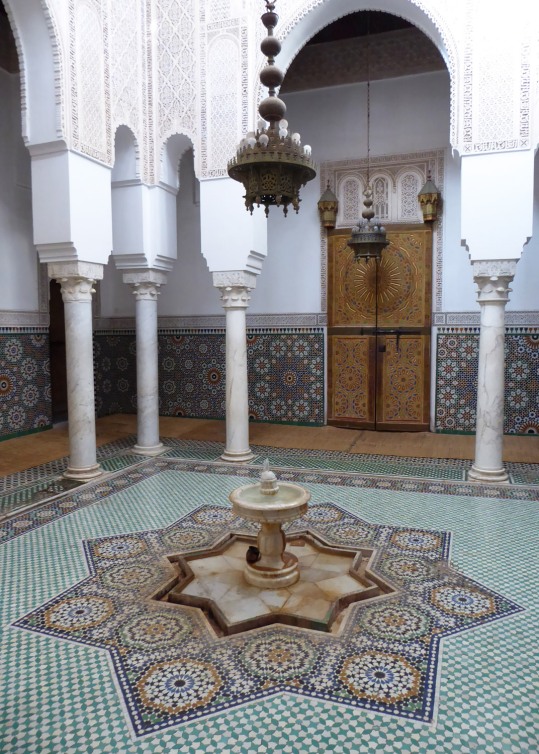 When Hajja learned that I wrote dinosaur books, she convinced us to change our plans for the next day to go see dinosaur tracks that were a few hours outside of town.  What she didn’t tell us is that she hadn’t been there in 10 years and didn’t know exactly where they were – but she was sure there would be a sign.

We did get some great views of rural villages during our hunt for dinosaur tracks. 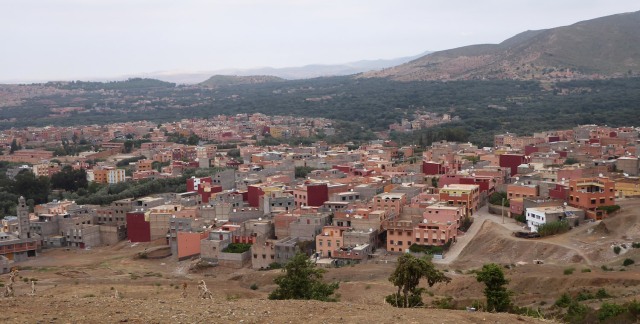 She finally had someone tell her we had come too far, so we went back, just to find that since she was last there a wall, with locked gate, had been built around the dinosaur tracks.

While we walked along the wall, trying to see if we could get a glimpse of the tracks, Hajja ran into some young boys who just happened to have the key to the gate in their house.  We never did understand why 10-year-old boys would have a key to the gate.

The tracks were extensive and a delight to discover as we walked over the rocky surface. 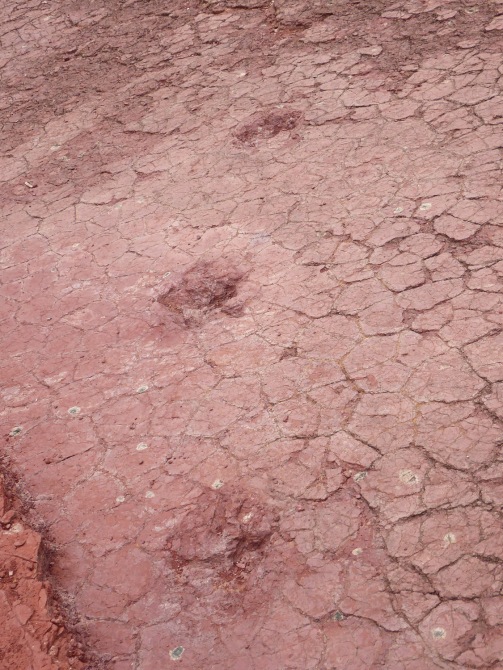 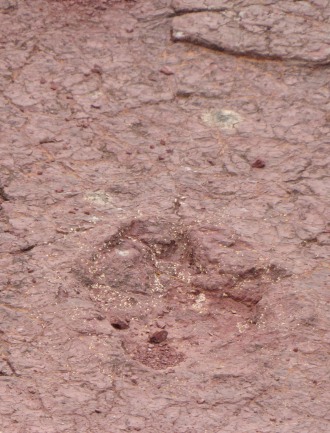 What was most fun is that the adventure turned into a dinosaur lesson for the owner of the key and some of his friends.  They knew there were tracks inside the fence, but did not know from what kind of animal.  You could tell from the size of the tracks that it was a good sized animal and probably a theropod.

While we were talking with the children, we got to see local Berber farmers pass behind us on donkeys carrying feed for their animals.

Of course food had to fit into our itinerary in some way, so we took a daylong Moroccan cooking class — that was also a contrast of new and old.  We made bread in a traditional clay oven.

But then entered a high tech cooking area with video projection systems so we could see the master chef.

Leila and I made individual servings of chicken tagine, and several salads.

We even got to keep the tagine pot when we finished eating our meal.

After four days in Marrakesh, we moved on to Fez, with more time in the medina, souks and riads. 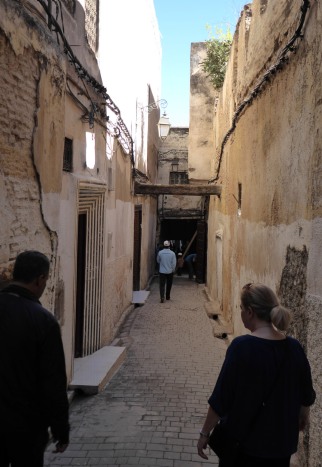 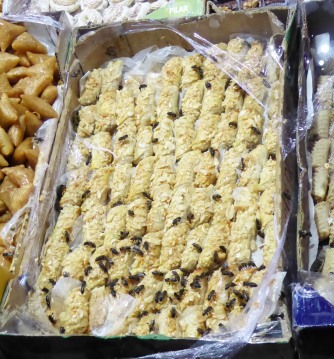 It may look like the second photo is a delicacy covered with raisins, but each dark spot is a bee.  It was not possible to capture the hundreds of swarming bees that filled the air.  As you can image, we did not buy any sweets and moved on quickly.

A highlight of the being in Fez was a visit to the Roman ruins in nearby Volubilis. The ruins not only provided insight into life when the Romans ruled the area 2,000 years ago, but a look at the beauty of the Moroccan countryside with its many olive groves and vineyards. 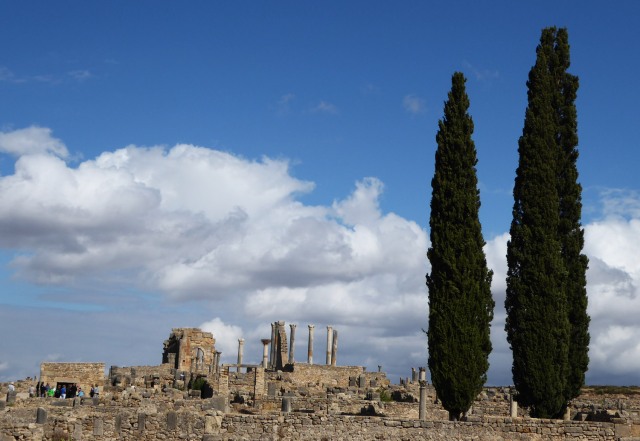 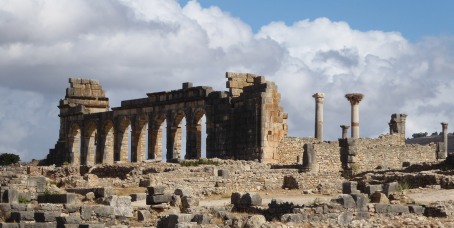 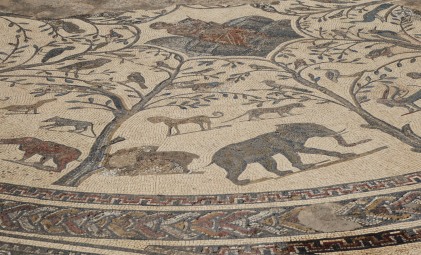 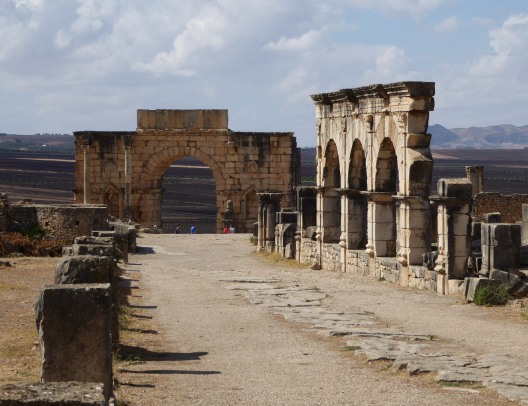 This was our first excursion on the African continent, but not our last.  In June we will visit South Africa, Botswana, and Zimbabwe.